Esoteric Schema in Early Religious Art: Presenting an overview of the work of K. H. De Haas (re edited 2015).


'Since God is intellectual, and all intellect returns into itself.'
Sallust

[These small publications were discovered at a library discard sale in remote Western Australia. The thrill of the find was tempered some time later after noting the library date ticket inside the hardcover was clear - these books had never once been borrowed.]

De Haas notes a clear relationship between early religious art and number symbolism which has its basis in geometric structure and which differs from that exoteric form of geometry known as 'perspective'. Through this exposure to the work of de Haas, three accessible geometries will be exampled. We begin with two works by the Flemish painter Rogier van der Weyden (1399/1400-1464) painting Christ Appearing To His Mother c.1436-40, The Seven Sacraments Triptych (Altarpiece  c. 1440 - 1445), Fra Angelico's Lamentation over Christ (c.1436-41), and Duccio di Buoninsegna's Triptych, (Altarpiece, c. 1300-05).

There will be a link to that area of the Sacred and Profane Love's analysis showing the development of the hepta star located at the centre of that painting. The confirmation of what I discovered in my own analysis of the Sacred and Profane Love was somewhat validated through the discovery of de Haas's geometric complexities and is the reason these works are being shared here. P.

Fig 2. shows the form of the triangle referred to by de Haas in Fig 3. (This painting is now thought not to be an original, but a copy of the original by van der Weyden's studio.)


In the above excerpt taken from the memorandum, De Haas has isolated, measured and calculated the distances, conjunctions relating to the stigmata points on the hands and left foot of Christ [see fig. 2]. De Haas muses:

"The present writer has found hepta-a. only in, or in connection with pictures in which Christ is represented."


Is this a programme of Van Der Weyden a rule of the guilds perhaps, or simply a self-affirming observation on the behalf of De Haas? 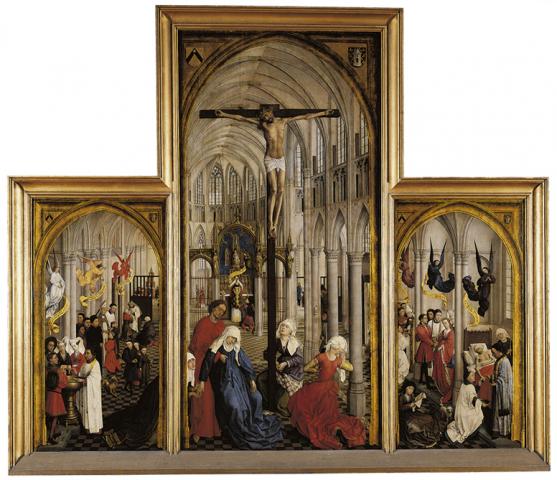 In The Seven Sacraments (Altarpiece triptych) c.1440 - 1445) by Rogier Van Der Weyden (fig.4 is a detail with a triangle annotation) De Haas is focusing on the measurements obtained from the triangle formed by the three nails in the hands and feet of Christ.

De Haas is quite frugal with information here, the reason being that the measurements were taken directly from the painting via a tracing: The author allows the measurements to speak for themselves, but the work has been assisted by the Head curator of the Royal Museum of Fine Arts, Antwerp - as can be seen on the lower right facing page of the memorandum.

In the above image there are two arrows pointing to the location of the eight pointed star in St Dominic's halo (upper left quadrant - Fig. 2), and two arrows indicating the twelve pointed star on the Virgins head-dress (Mary's arms are supporting the head and neck of Christ) mark the diagonal line that continues to the paintings upper-left corner.

The author discusses the hepta circle - a circumference evenly divided by seven regular sections - as indicated by the presence of the 8 pointed star in the halo about the head of Saint Dominic (Fig. 2); and the 12 pointed star that is placed upon the head cloth of the Virgin. By using the Virgins 12 pointed star as an axis, a circle may be established that order the rectangular measurement of the painting.

Within the rectangular form described H,I,J,K by De Haas (W marks the horizontal line in Fig. 9) the letters X, O, refer to the stars of St Dominic & the Virgin as presented by the arrows in fig. 8. and are present. De Haas notes that the 12 pointed star on the Virgins head marks the centre of a cross (X) - invisible in the finished painting but nevertheless present in this artworks schematic execution and is the paintings 'centre of symmetry'. Employing De Haas's considerations of the eight pointed star as the apex of  circle the painting can be divided into seven equal sections with the line H-O with the angle between X & W  being the first of  the seven sections. (see below Fig 10).


Regarding the number symbolism (i.e; the number seven) used by Angelico as a means of sacralizing both process and the finished work De Hass offers this suggestion:

...it becomes clear to us that, in Catholic symbolism, no lasting tangible or visible result of an act of consecration is required in order to provide an enduring effect of the use of the number 7, if once this number had part in the act. Similarly, Fra Angelico’s temporary use of a hepta-circle and his placing of the permanent stars, whose loci reveal the stars’ connection with the circle and its division points were apparently considered by this pious artist to bestow on his painting a lasting consecration worthy of its Subject.

This theurgical (and so religious) operation employs number symbolism to indicate and implicate the mystical properties of (in this instance) the number seven. Number symbolism stands in direct relationship to conceptual structure and physical structure, yet occupies a category distinct from the geometry of perspective. The twelve & eight pointed stars are signifiers placed in geometric arrangement with the intention to synthesise the structure with the substructure and complete design with the intention to elevate, harmonise and sanctify the final work.

Duccio's triptych of 1300-05 is the subject of the this last featured presentations reproduced from the memorandums of de Haas.


The circle at the centre of the Sacred and Profane Love  can be progressed from the (fig. 13: fig.13(a) and fig. 13(b)) to conclude as the hepta star. The key to the circles circumference is the small track winding back over the rise near the right arm of Ceres.

Perhaps it should come as no surprise that monastic origins elucidate the reason as to why the older form of geometric consideration in art (symbolic geometry) seems to almost exclusively fall under the spell of Religious expression.

These complexities are the result of a focus dedicated to contemplation of the divine and a firm belief in an invisible order to the phenomenal world which involves teleology. While the plastic images of art may be shared by all, the rigorous intellectual order remains hidden as a devotional contract of servitude and humility between the mind of man and the Mind of God.
~


The other de Haas studies not reproduced from the memorandums here are:


There are also two missal frontispiece - German and Venetian, and a cross section of a column from Englise Saint-Remi.