The purpose of writing a visual analysis is to train the eye to see precisely so that the mind may more accurately perceive that which is being presented by the artist. What is required from a visual analysis should be no more than is necessary to describe what is actually visible. In the situation of the Sacred and Profane Love it is the Galleria Borghese itself - the home of the Sacred and Profane Love - which has presented an inaccurate visual analysis by describing the clothed female as "the figure with the vase of jewels".

In fact, because that figure has her arm resting upon a closed container (see Fig 1.) it is incorrect to claim that the vase contains jewels (a vase is an open container) and all corollaries or conclusions which incorporate that claim must be considered inaccurate because it is impossible to tell whether that 'vase' contains anything at all...

The Sacred and Profane Love is a rectangular oil painting on canvas painted around 1514, (H. 118cm; W. 279cm), and presents an image of two young women seated at either end of a well or fountain carved in the form of a classical sarcophagus (the first impression is simply that of a water-filled sarcophagus) in an open air pastoral setting. One of the women is opulently clothed while the other at the viewers right is semi-nude. Either end of this (apparently) rectangular sarcophagus is obscured by the seated forms of the two women, and has carved relief visible along the face.

Leaning forward over this unusual sarcophagus/fountain from behind as it were and midway between the women, a winged infant with bowed head has the right forearm immersed in the fountain and is preoccupied in water play. The sarcophagus bears a strong resemblance to a capped spring as it is filled with water, however, a brass free-flowing spigot at the centre front pours this water onto a small flowering rose bush growing there. Therefore under scrutiny, and primarily because of the presence of the spigot, this unusual sarcophagus/well would be more suitably termed as a 'fountain having the form of a classical sarcophagus'.

At the viewers left, the stare of the clothed figure gazes forward and while the women's eyes do not engage, the body positions (or language) of these two contrasting figures incline toward each other.
The clothed figure is arrayed in a luxuriant silvery/blue/white dress which is replete with girdle or belt and she appears oblivious to her semi-nude counterpart. The design of this opulent dress is low across the shoulders and chest, full at the sleeves, and the fabric so ample in volume it appears either courtly or formal in this treed setting, and in direct contrast to the semi-nude, the clothed figure presents as theatrical or ostentatious. On the right arm of this same figure the full ample blue/white fabric is folded back to expose a puffed red sleeve which is then tailored or fitted down to the wrist and the same red (perhaps with laced edging) is also exposed at the hem of the white dress. As visual emphasis on duality and contrast the covering garment of the left arm is also rolled back to expose a white sleeve. Overall one may perceive this abundant white gown to be an over garment or a covering gown (see ). Below the wrist the right hand is gloved and rests in the woman's lap. Under this hand are leaves and a flower torn (logically) from the small rosebush watered at the fountains front. Across the ledge of the fountain are strewn a flower, pieces of leaved branch, and single leaves (refer to detail in Fig. 2.) which forms a visual trail between the plant, ending at the sprig of rosebush clasped under the gloved right hand in the woman's lap. Her left arm and gloved hand rests upon the lid of a closed container. Slightly further to the right of the resting hand of the semi-nude figure, a shallow silver bowl (phiale) is placed near the pieces of torn rosebush on the ledge directly above the spigot.


Across to the viewers right and balanced by her right arm resting along the fountains ledge near the phiale, the semi-nude is holding aloft a small lighted oil lamp in her left hand. This figure would be fully nude, save for a twisted piece of white fabric wrapped across the hip, lap, and thigh of the fully exposed left leg. The legs are crossed and only one leg (the left) is completely visible. This figure sits upon a billowing red fabric which appears to rise of its own accord as there is no indication of breeze suggested anywhere else in the painting. There is either a phrenological or stylistic similarity between the women and they are comparably youthful in age, possibly eighteen to twenty-five years old.

As none of these three figures (the two women and the child) directly return the viewers gaze, the eye may roam about the picture unchallenged.


Compositely, the two women, child, and fountain/sarcophagus comprise a grand figurative suite which dominates and almost overwhelms the surrounding (diminutive) pastoral iconography because of its prominent centrality in the paintings design. The suite forms such a strong design group they might be equally well executed as a three dimensional body sculpted and modelled in the round.


There is also a sense of seclusion influenced by a shadowed, sombre darkness  in the mid-foreground from which this group emerge as though gently illumined from the front. The foreground and mid-ground colours are earth tone (oxides and ochres) browns and greens, appearing as though struck from one another, the exception being the use of primary colours  - silver, red and white - to distinguish the women's clothing from those surrounding earth tones. In the apparent distance are the blue and yellows of a lightly streaked clouded sky at sunset. The skin tones are pale though warm, the hair partly dressed with tints of reddish golds.


Directly behind the group is a towering tree that rises beyond the picture plane slightly branching behind the head of the clothed figure. This trees dark shadowed breadth creates a sombre depth against which to highlight the clarity of silver dress, skin tone, and the cool pale stone of the sarcophagus/fountain. As a design device the tree presents another important distinction between the two women. Because it weighs heavily behind and over the head of the clothed figure, it appears to  contain and 'ground' her.


In contrast, the semi-nude is raised slightly higher than her counterpart - with the airy blue of the clouded sky as her background. This, combined with the billowing red fabric and the lamp held against the lighter blue, white, and yellow hues of a dimming sky, presents a certain lightness or volatility.

Carved upon the face of the sarcophagus (see Fig. 5) are reliefs, perhaps indicating a particular narrative. These are (from left to right) of men and women dancing around a prancing mare; further along and just past the rosebush and spigot, a supine male is being whipped; past that scene a female figure stands beside a small tree and looks on. Near her there is another figure, though the specific action is almost indecipherable. The horse and scene of flagellation are divided by the rosebush and the spigot. To the upper-right of the spigot can be seen an escutcheon. With the imposing protection of the tree behind them the location of the central group could be interpreted as a bower within a provincial picturesque.


To recapitulate this central suite of figures must include, as though it were a sculptural group, the sarcophagus /fountain. Surely this must declare the fountain as absolutely critical to the pictorial language of this work, and not merely an incidental prop or device to pose and exploit images of an idealised feminine.


To the left and right of the central suite, the rectangular picture plane is surrounded by diminutive images that reference provincial life.

To the upper left of the picture near the clothed female is a mountainous area which dominates that quarter of the picture, and along a diagonal road around that mountain a rider on horseback races upward toward a castle or fortress.

At far mid-right of the picture and next to the image of the naked female is an image of two men on horseback; both horses are rearing and below them, a dog chases a rabbit. At extreme mid-right is a shepherd with flocks, and in that bucolic environment a pair of lovers is in reclined embrace.

Behind and above the two figures on horseback in the apparent distance is a lake divided by an isthmus, beyond which lay a townscape. Receding farther into the distance in the extreme upper-right quarter a church spire and varying roof lines form distant village architecture, and beyond that sea and possibly coves. Concluding the paintings upper-right quarter are the sun streaked clouds; cirrus and stratocumulus run from extreme upper-right across to the extreme upper-left of the picture plane, divided only by the spreading form of the large tree.


Below is the first of four episodes 'Ways of Seeing' by John Berger for the BBC, 1972. This series by John Berger makes for invaluable viewing and reminds us of the effort to truly see beyond the glamour of 'art'.  In this video Berger states:


"I don't want to suggest that there is nothing left to experience [when standing] before original works of art... except a certain sense of awe... because they have survived, because they are genuine, because they are absurdly valuable. A lot more is possible - but only if art is stripped of the false mystery and the false religiosity which surrounds it."

As a discipline, art history should only deal with historical facts, meaning is not the realm of art history and yet art historians often succumb to fanciful speculation and educators reiterate these false readings which only contribute to a bureaucratic educational system unwittingly endorsing the 'mystification of art'. Berger might be termed a new historian, a post-modern type whose perceptions bring art historical considerations in line with contemporary reproductions that strip art from the hallowed environments and creatively foretell the shadowless, critical on-line glare of the twenty-first century.


Next blog: The correct identities of the women at the sarcophagus/fountain. 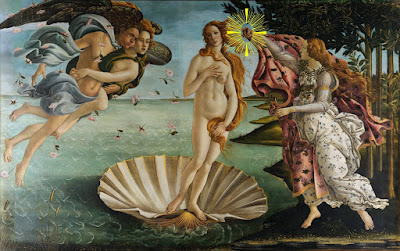 Need  a break? - check out my stressless unrelated time-waster on tumblr -